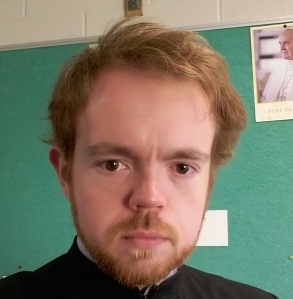 You can tell by the colours on the leaves that we have once more come round to ‘Remembrancetide’: last week we celebrated the lives of the saints in heaven; and, later, remembered in our prayers the Church Expectant; now the whole country turns its mind to those fallen in the wars.

Last year was the 100th anniversary of the start of the First World War; and, you might remember, this was marked by a big service at Westminster Abbey; and, if I recall correctly, the Ministry of Culture suggested we all switch off the lights in our houses, at the fateful hour, to symbolise the ‘lights going out all over Europe’.

But there was another centenary last year, shortly before this; commemorated only with a plaque at a rural bus stop. As the papers described it: “A hundred years ago, a steam train carrying an unknown poet made an unscheduled stop in a Gloucestershire hamlet called Adlestrop. Absolutely nothing else happened.”

Nothing else happened, but the man wrote a poem about it, which has been described as “one of the nation’s favourites”, though I’d never heard it before last year – so here you go:

Yes. I remember Adlestrop—
The name, because one afternoon
Of heat the express-train drew up there
Unwontedly. It was late June.
The steam hissed. Someone cleared his throat.
No one left and no one came
On the bare platform. What I saw
Was Adlestrop—only the name
And willows, willow-herb, and grass,
And meadowsweet, and haycocks dry,
No whit less still and lonely fair
Than the high cloudlets in the sky.
And for that minute a blackbird sang
Close by, and round him, mistier,
Farther and farther, all the birds
Of Oxfordshire and Gloucestershire.

There is apparently debate over whether or not this is a ‘war poem’: on the one hand, it was written before the War, and I should imagine some enjoy it for that charm of the last, late Edwardian summer; and yet, at the same time, the clouds were gathering (June 24th 1914), and maybe one senses a cetain tension: “someone cleared his throat”; the feeling that, if “No-one left and no-one came”, then what, exactly, are they waiting for? And, at the end, the nigh-on apocalyptic sound of “all the birds”, like in the Book of Revelation we hear “the voice of many angels round about the throne and the beasts and the elders and the number of them was ten thousand times ten thousand, and thousands of thousands”—

And, indeed, whenever I a walk in the countryside, amid the “willows, willow-herb and grass, / And meadowsweet, and haycocks dry” I always think of the First World War.

And it’s strange: in the countryside one feels so far from London – and from all that is contingent and trending and passing away – as C.S. Lewis might put it, out of the Shadowlands, into eternal England; “No whit less still and lonely fair / Than the high cloudlets in the sky”.

And yet this eternity – admittedly, one known half through landscapes, half through books– is somehow marked, forever, by the First World War, killing men off by the villageful; the pretty war memorials scars of real wounds that once went so deep.

The Suffering of God

And this makes me wonder: does eternal God suffer?

Now, I understand this is a controversial point in theology – so I must tread carefully; and I will make three points, in ascending order of controversy:

(I) Suffering as pain

First: it is undeniable that the Divine Son, Jesus Christ, in his human nature, suffered; that he who was scourged at the pillar, crowned with thorns, and had no place to lay his head, felt in his Divine Body many of the same pains as those distant wounded war casualties from black-and-white photos in the glossy centre pages of history books.

And that Our Lord, who was executed so unjustly, must be especially close to those who were cruelly shot for desertion by their own side.

And Our Lady, the Virgin Mary, standing at the foot of the cross, knows the very same sorrows as those mother who stood and waited for news of their own beloved sons’ deaths.

But there is another sense to suffering: suffering can also mean letting things happen, not having control, being passive; things happening to you that you do not want.

Rowan Williams, in his recent book on St Mark’s gospel, notes that Jesus only accepts the title “Christ” when he is most powerless: arraigned before the High Priest, abandoned by his disciples, bound and handed over to wicked men.

Kierkegaard thought the essence of tragedy was suffering: having bad things happen to you, which are not your fault.

The origins of the First World War are complicated; and scholars disagree over how to best apportion blame. But it is clear, of course, that many millions suffered for what was not their fault: (except that, like us, they were sinners, living in a world ruled by sin).

When we are called upon to suffer, then how do we react?

Edward Thomas, the poet who wrote ‘Adlestrop’, enlisted in the army just over a year later. He was killed on April 9, 1917, the first day of the Battle of Arras. He never lived to see his poem published.

And some others enlisted; and some were conscientious objectors; and still others fled. And afterwards some were proud of what they did, and I’m sure others were ashamed: how we act – in war, in suffering, at any time – is, of course, immensely important.

But then, I remember the disciples fled Gethsemane when the armed gang arrived to take Jesus. And how our Lord then reacted – freely giving himself over to wicked men – was not intended simply as an example, to strengthen us in our suffering, or indeed even to remind us that “No one has greater love than this, to lay down one’s life for one’s friend.”

No: he did it to save them; and to save the war dead, and the deserters and objectors; and the French and the Germans; and the Tsar and Lloyd George; and the Archduke and his assassin and even the centurion who pierced his own side with a lance; and to save you, and the many, whatever we have done.

(III) Suffering in his Divine Nature

Which brings me to the final and most controversial statement: does God suffer in his eternal Divine Nature?

I submit that he does. Because God is love; and how else does a loving father, loving mother feel, to see their beloved children in pain, and yet so distant?

God suffered to see his people turn away from him both in ancient times and modern, when they turned away from justice because they preferred the gains of war, ignoring the call to turn their swords into ploughshares.

God suffers like the father of the prodigal would have done, to hear a word from a far country of about beloved son’s sad existence.

God suffers like the shepherd who lost one of his sheep, and then climbed out on the mountaintops to find him:

Lines from a famous revivalist hymn; and I have spoken about three kinds of suffering – but really they are all of one piece: for why did our Lord suffer the thorns and the cross, but that he handed himself over to wicked men, for us; and what was this, but another step of the Incarnation, when he “did not count equality with God a thing to be grasped, but emptied himself—”

Or, as another famous hymn writer, Charles Wesley puts it:

‘He left his Father’s throne above
So free, so infinite his grace—
Emptied himself of all but love
And bled for Adam’s helpless race.

O divine love, that suffered so much, for it cared so much, that it embraced nearly every form of suffering known to fallen humanity; and all this that, some day, we (all of us: the war dead and the saints) might need suffer no longer.