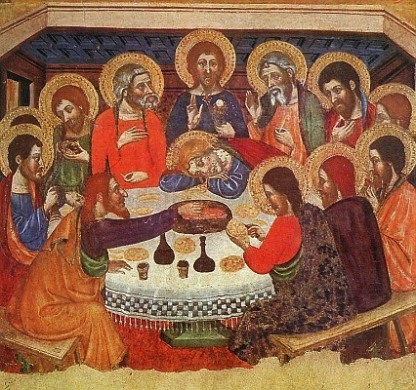 A Sermon for Maundy Thursday

There is a saying that all clergy are, at their heart, failed actors.  I would like to poo poo this as terrible stereotyping (the clergy version of the famous insult to teachers: “those who can – do; those who can’t – teach (and those who can’t teach – teach P.E.)”

But the truth is that my childhood ambition was to be an actor (strictly speaking I wanted to be Doctor Who, but when I discovered that Doctor Who wasn’t real I decided to settle for being the actor that played him!)

There is a close link between religious practice and drama – I’m not just thinking of medieval Passion Plays or Hollywood Biblical blockbusters like Noah with Russell Crow…  The Eucharist, every Eucharist, is, at its heart a drama – a reenactment of the both the Last Supper and, symbolically, the crucifixion.  On Maundy Thursday, especially with the Seder meal, the nature of the reenactment is writ large, but the drama is in the heart of every Eucharist.

In a sense we are all disciples and we are all the Body of Christ, but for the moment of the drama, around the table we are in role…

But we come to the Eucharist to act out a role – and the stories of the disciples help to locate ourselves in the story:

Seeing the drama in the Eucharist can help make our Communion more profound.

The drama has been played out over centuries in countless different situations.  In our ‘Ordinary Time’ Eucharist service books there is a lengthy quotation from Dom Gregory Dix about how the drama of the Eucharist has spoken to people across the world and through history:

Jesus told his friends to do this, and they have done it always since.  Was ever another command so obeyed?  For century after century, spreading slowly to every continent and country and among every race on earth, this action has been done, in every conceivable human circumstance, for every conceivable human need from infancy and before it to extreme old age and after it, from the pinnacles of earthy greatness to the refuge of fugitives in the caves and dens of the earth.  Men have found no better thing than this to do for kings at their crowning and for criminals going to the scaffold; for armies in triumph or for a bride and bridegroom in a little country church; for the wisdom of a Parliament or for a sick old woman afraid to die; for a schoolboy sitting an examination or for Columbus setting out to discover America; for the famine of whole provinces or for the soul of a dead lover; in thankfulness because my father did not die of pneumonia; for a village headman much tempted to return to fetich because the yams had failed; because the Turk was at the gates of Vienna; for the repentance of Margaret; for the settlement of a strike; for a son for a barren women; for captain so-and-so, wounded and prisoner of war; while lions roared in the nearby amphitheatre; on a beach at Dunkirk; while the hiss of scythes in the thick June grass came faintly through the windows of the Church, tremulously, by an old monk on the fiftieth anniversary of his vows; furtively, by an exiled bishop who had hewn timber all day in a prison camp near Murmansk; gorgeously, for the canonisation of St Joan of Arc – one could fill many pages with the reasons why [we] have done this, and not tell a hundredth part of them.  And best of all, week by week and month by month, on a hundred thousand successive Sundays, faithfully, unfailingly, across all the parishes of Christendom, the pastors have done this just to make the ‘plebs sancta dei’ – the holy common people of God.

As a good liberal Church we don’t like to focus on sin, we prefer to focus on God’s love for us, and God’s calling that we should love others.

Only Christians, only a church, which knows and owns its own capacity to collude, to oppress,  to betray, like those first friends of Jesus, can be a church that can proclaim the forgiveness of sins and the resurrection of the dead.  We have to be aware of how the Church still betrays Jesus, in our prolonged failure to appoint women bishops, in our inability to see all Christians regardless of gender, social class and sexuality as equal before God, in our obsessions with power and authority the Church still betrays Christ.  And in our own lives with our obsessions with the insignificant, our inability to love and whatever else in our lives that falls short of God’s calling.

The liturgy tonight takes us through the last supper with its strange and moving teaching and sharing of bread and wine, through the symbolic washing of feet, to Jesus’ betrayal and arrest and the disciples fleeing in disarray.

Tonight we leave in silence – and it feels awkward and ‘wrong’ – we should end our worship with a cup of tea and a chat.  Our friendships formed over cuppa and Rich Tea Biscuit are an important expression of our faith and being the Church.

But tonight we take time out from the joy and inspiration that hopefully characterises our faith most of the time to reflect on our brokenness and offer that to God.

Now I close with the words of St. Paul:

“…I received from the Lord what I also delivered to you, that the Lord Jesus on the night he was betrayed took bread, and when he had given thanks, he broke it and said, ‘This is my body which is for you.  Do this in remembrance of me.’”