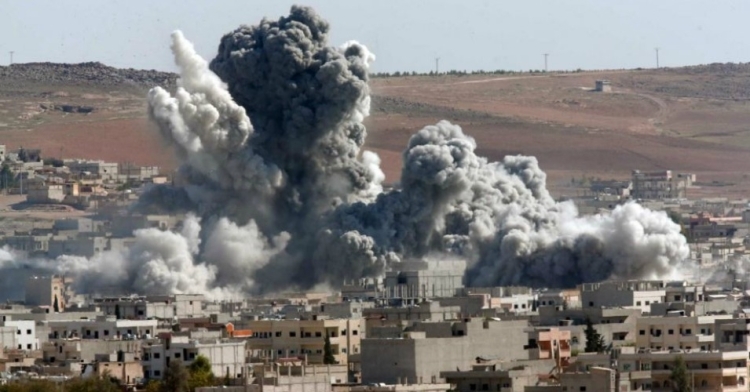 Just War and the bombing of Syria

First Reading: Malachi 3.1-4
See, I am sending my messenger to prepare the way before me, and the Lord whom you seek will suddenly come to his temple. The messenger of the covenant in whom you delight—indeed, he is coming, says the Lord of hosts. But who can endure the day of his coming, and who can stand when he appears? For he is like a refiner’s fire and like fullers’ soap; he will sit as a refiner and purifier of silver, and he will purify the descendants of Levi and refine them like gold and silver, until they present offerings to the Lord in righteousness. Then the offering of Judah and Jerusalem will be pleasing to the Lord as in the days of old and as in former years.

Second Reading: Philippians 1.9-11
This is my prayer, that your love may overflow more and more with knowledge and full insight to help you to determine what is best, so that in the day of Christ you may be pure and blameless, having produced the harvest of righteousness that comes through Jesus Christ for the glory and praise of God.

Gospel Reading:   Luke 3.1-6
In the fifteenth year of the reign of Emperor Tiberius, when Pontius Pilate was governor of Judea, and Herod was ruler of Galilee, and his brother Philip ruler of the region of Ituraea and Trachonitis, and Lysanias ruler of Abilene, during the high priesthood of Annas and Caiaphas, the word of God came to John son of Zechariah in the wilderness. He went into all the region around the Jordan, proclaiming a baptism of repentance for the forgiveness of sins, as it is written in the book of the words of the prophet Isaiah, “The voice of one crying out in the wilderness: ‘Prepare the way of the Lord, make his paths straight. Every valley shall be filled, and every mountain and hill shall be made low, and the crooked shall be made straight, and the rough ways made smooth; and all flesh shall see the salvation of God.’”

We are a nation at War.  The fighting is far away, the people being killed are Muslims; and while the terrorists have cunning and fanaticism on their side, they are in one of the world’s poorest and most unstable nations.

It is easy to write this off as something expected and normal.  The media are doing it.  After the horrific murders in Paris the television spoke of nothing else.  When we started bombing sites in Syria there wasn’t even a specially extended edition of the news.

Since the second Iraq war politicians have talked about a ‘new kind’ of war, or a ‘war we have not seen before.’  They imply that war is a bit like a car, something you can redesign and make safer.  War is nothing like that; you can’t design a war and then unveil it.  War is a relationship, a way of thinking about other people, a way of dealing with them.  And like any relationship (like a marriage) you must begin it knowing it could turn out for better or for worse.

We must not see this war as normal, war can never be that.  Because it is far away, and involving people different from ourselves we must not forget what we know of war.  In March 1919 Siegfried Sasson wrote his poem, Aftermath:

Do you remember the nights you watched
and wired and dug and piled sandbags on the parapets?
Do you remember the rats; and the stench
of corpses rotting in front of the front-line trench –
And dawn coming, dirty-white, and chill with a hopeless rain?
Do you ever stop to ask, ‘Is it all going to happen again?’
Do you remember that hour of din before the attack –
And the anger, the blind compassion that seized and shook you then
As you peered at the doomed and haggard faces of your men?
Do you remember the stretcher-cases lurching back
With dying eyes and lolling heads.
Have you forgotten yet?…
Look up, and swear by the green of the spring that you’ll never forget.

If this war continues we must be prepared to contemplate more war memorials, more deaths, more injuries, more orphans, and much more besides.

There are two possible positions for Christians to hold on the morality of Warfare.  (Well, other positions are possible, these two have a strong basis in the Bible and in the tradition of the Church.)

The first position is pacifism.  Pacifists will look to the example of Jesus, how he was attacked and did not fight back.  How when St Peter attacked the people coming to arrest Jesus and cut of the ear of one of them, Jesus stopped the violence and healed the man.  Jesus commanded his followers to ‘turn the other cheek,’ and not to return evil for evil.  To “love your enemies” is the Christian command.

I have a lot of respect for pacifism, but it is not the only position Christians have held through the ages.

Another tradition was developed by St Ambrose of Milan and St Augustine of Hippo in the 4th and 5th centuries.  Augustine thought that in some extreme circumstances a limited use of force could be one of the ways in which a Christian might be required in charity to serve the needs of an innocent neighbour under attack by an assailant.

Through the centuries Christian scholars and leaders developed terms in which a war could be declared ‘just.’ They are as follows:

I will just quickly run through the questions we need to ask of this war, to decide weather or not it is just.  You may come to different conclusions, in a Church of this many people it would be a surprise if we all agree, but it is important that we bring our faith in Christ to these matters, and consider them from our Christian perspective, and struggle to make sense of them:

A proper authority must declare war.  When the theory of the Just War was first put forward that meant that one Noble could not just wage war on their neighbour, even if they were wronged.  The courts, or the King of the country had to approve.  There had to be an appeal to a higher authority.  In today’s world, this means any action has to be approved by a body like the United Nations.

There must be a just cause.  You can only ethically attack someone who has done something wrong.  The Paris attack and the threat of further atrocities is certainly a just cause.

There must be the right intention.  Revenge can never be condoned by the Christian Church.  In Christian teaching only God is in a position to exact revenge, as only God knows the true good and evil of the human heart.  “Vengeance is mine says the Lord.”  Revenge can never be an acceptable motive.  The motive that Just War theory does allow is one in which you are aiming for a just and lasting peace.  An end to terrorism, is, a right intention.  But the tendency to see it as ‘hitting back’ or revenge for the attacks in Paris must be held in check.

War must be the last resort.  Here we really meet a sticking point.  What really needs to be done to beat ISIS is to choke its supply line of funding, oil and sympathy. To do that involves following the money and the oil, investigating the activities of Western allies such as Saudi Arabia, Qatar and Turkey.

I don’t think any observer could describe this war as a last resort.

Finally, there must be a reasonable chance of success.  So even if we have a right and just cause for war, if we cant win we should not take lives of others for the sake of our principles.

With the bombing of ISIS there  is no ‘end’ in sight, no plan for reconstruction or stabilisation once the bombing has stopped.  I am no expert, but surely it can only deepen the chaos.   Have we learned nothing from Iraq, from Libya?

Most military experts don’t think bombing will work – and certainly not without ground troops.

David Cameron’s claim that there are 70,000 ‘moderate’ opposition fighters in Syria, ready to take the ground fight to IS, has been derided by experts. The opposition consists of at least 100 different groups, each with their own aims, not all of which can be trusted to oppose IS.

The only way to defeat terrorism is to tackle the conditions in which fanaticism can thrive – injustice, perceived and real, poverty, hatred.  Having lived in Northern Ireland for the first 18 years of my life I know that massive acts of violence on the part of the army or security forces only creates more terrorists.  The IRA could not have organised a more efficient recruitment drive than the British Army’s massacre of civilian protestors on Bloody Sunday.  Every person who is killed by British bombs leaves behind a family, mothers, fathers, brothers, sisters, children, and all of these are suddenly 10 times as likely to take up arms.  Here again, I fear that this war cannot be described as ‘just.’

Finally: The fighting must be legitimate, that is without disproportionate violence.  It is often said that ‘truth is the first victim in a war.’  We simply do not know enough of the details of this action to judge.  The only thing we know for sure is that civilians almost always suffer most.  ISIS isn’t stupid. When Raqqa is bombed, ISIS fighters scurry into their tunnels or into areas of high civilian density. The idea of surgical strikes in this context is fanciful.

The Christian theory of a Just War does not allow us to settle for three or four out of the six conditions being good enough.  As someone who has lived through terrorism in Northern Ireland, as a Christian, and as a priest, I can come to no other conclusion than that this act of violence, put forwarded by David Cameron and supported by our own M.P., Heidi Alexander, is wrong.  This is not a Just War.

I close with a line by Albert Einstein: “Peace cannot be kept by force. It can only be achieved by understanding.”